This post may have affiliate links. If you click one of these links and make a purchase, we will be paid a commission at no additional cost to you. 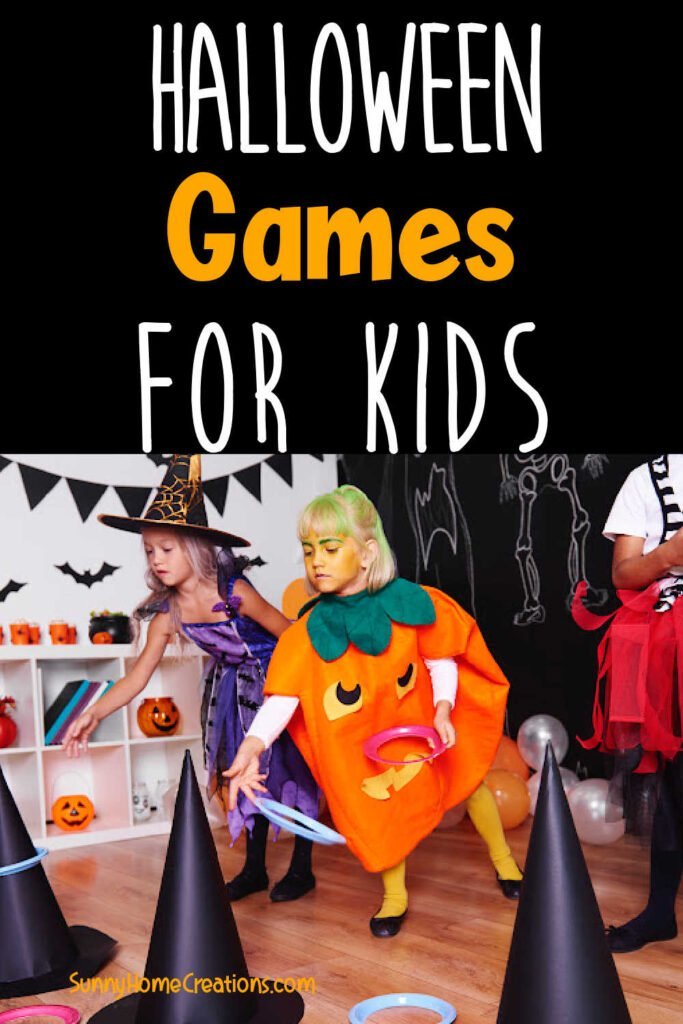 I remember the first Halloween party I went to.  I think I was in Kindergarten and it was at my next-door neighbor’s house.

We played some fun Halloween party games at this party.

My neighbor’s Dad rolled me around on an office chair in their garage.  I was blindfolded and he rolled me from station to station.  I would put my hand in a bowl and he’d tell me it was eyeballs or brains or some other equally creepy thing.  It was so much fun!

If you are throwing a Halloween party this year, here are some fun games that are sure to delight your Halloween guests.

Knock Down the Ghost

This game is super simple to set up.  You need 15 white disposable cups, a soft nerf ball and either a black permanent marker or some googly eyes and glue.

You want to make each cup look like a ghost by adding eyes to it.  So either glue on a set of googly eyes or draw a pair of eyes onto each cup.

Find a flat surface you can stack the cups onto.  You are going to make a pyramid with them – put five cups on the bottom row, stack four on the next row up and so on.

Next, the party guests will take turns throwing the ball at the “ghosts” and try to knock them all down.

This Halloween tin can bowling game from over at Red Ted Art is a fun Halloween party game perfect for kids.

The bowling “pins” are tin cans with super cute characters. I love how they used more than just paint for some of the cans.

Set your fun Halloween bowling pins up, use a ball and bowl to see who can knock over the most pins!

Mummy wrap is a super easy and fun game.  All you need for this game is either a few rolls of toilet paper, some white fabric or some white crepe paper.

In order to play this game, you need two teams of people.  People can split themselves up however they want to make the teams.

After the teams are decided, it is time to decide who is going to be wrapped.  Only one person will be chosen (unless you decide to do another round).

If you feel a time limit is needed, then set a timer.  While the timer is going or after someone has shouted “go!”, all the people on your team will wrap the person who is going to be wrapped.

The winner will be the team that wraps the person first.  You can also choose to have a finish line that the mummy needs to run across in order to win if you prefer.

Bobbing For Apples or Bobbing for Apples with a Twist

I think almost everyone has played bobbing for apples.

You will need a bin to put some water and apples in.  Each person will take a turn trying to pick up an apple with their teeth.

If you want to play this game with a twist, here is another variation.

You are going to have all the apples be green, except for one red.  The oddball apple will be the red one and will be the “poisonous” apple from the evil queen.  All the apples will go into a large bucket or bin with some water.

Each person will be blindfolded as they take a turn.  The person who gets the poisoned red apple is the winner.

This is the perfect game to play in the early evening before it gets dark out.

This is a skeleton themed relay race.

To set the game up, you need to do a little prep beforehand.

The teams will need to run across the yard and then grab one bone to bring back to the other side of the yard.  The team will then tape the bone onto the cardboard into the correct spot.  Each team continues running back and forth and adding the bones to their skeleton until one team has completed the skeleton.

Tic Tac Toe is always a fun game for kids, but change it up for some Halloween fun.

Create a board out of construction paper cut into the shape of a pumpkin and draw in the grid.  Use some mandarin oranges decorated as pumpkins as the x’s and o’s.

Play the game as you normally would.

Tape the witch’s face onto the wall or a door.

One kid at a time will be blindfolded, turned around in a circle three times, then try to put the wart on the witch’s nose.

This isn’t a game, it’s an activity, but when there is either pumpkin carving or painting pumpkins, it’s always a big hit at Halloween parties.

Just make sure to cover the table with a disposable tablecloth and I would also make some old shirts that can be used to protect clothing available for the kids.

Put several different paints in the center of the table, along with some paint brushes and cups of water.  The kids will be creating pumpkin masterpieces in no time.

This is another fun game and there are a couple variations you can try.

The first is using just one witch hat.  The witch had needs to be fairly stiff, with the tip of the hat pointing up.  You can set the witch hat on the ground and everyone can take a ring (or it could be the best out of multiple rings such as the best of 3).

Each person takes a try to get their ring onto the witch hat.

The other variation of this game is several witch hats arranged fairly close together.  Same deal, each person takes turns trying to throw rings onto the witch hats.  If the group of kids are a little older, then you could have different points depending on which hat is hit.

Another activity, but sure to be a hit.  Create a Halloween cookie decorating station.

This station should have some pre-cooked cookies, some different colored frosting and a way to apply to the frosting, such as bags with frosting tips pre-loaded with frosting.

I hope I’ve given you some fun games and activities to play at your next Halloween party.

We are a participant in the Amazon Services LLC Associates Program, an affiliate advertising program designed to provide a means for us to earn fees by linking to Amazon.com and affiliated sites